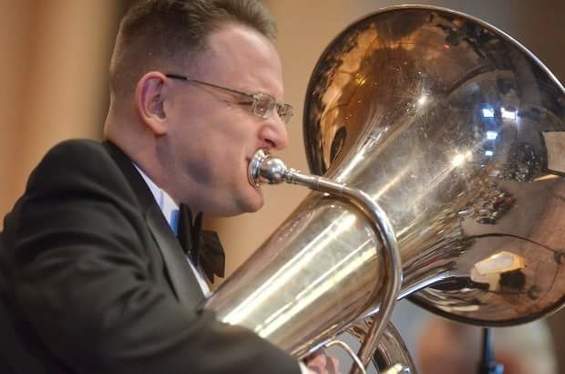 A native of Geneseo, Illinois, Tom Holtz received his Bachelor of Music degree in 1991 from Arizona State University in Tempe, Arizona. Soon after completing his undergraduate work, he began his position as a tubist with “The President’s Own” United States Marine Band in Washington, DC. During his career with the Marine Band, Tom served as a soloist, an arranger, and as a concert moderator. He also performed with the United States Coast Guard Band in New London, CT, and was featured as a soloist twice with the Army Blues, the premiere jazz ensemble from The United States Army Band, "Pershing's Own". He retired from active duty in 2012, after more than 21 years of service.
Tom is an active freelance musician in both classical and jazz venues across the mid-Atlantic region. He currently plays in the Bayfield Brass Quintet, from Annapolis, MD; and the Beltway Brass Quintet, from Fredericksburg, VA.  Tom is also a regular member of two New Orleans-style jazz bands, Big Bertha’s Rhythm Kings, from Baltimore, MD; and the Creole Gumbo Jazz Band, from Chesapeake Beach, MD. He also plays in the Balkan gypsy band Balti Mare, from Baltimore, MD; Off Bass Brass, a tuba quartet based in Washington, DC.; and Heimat Echo, a traditional German polka band from Occoquan, VA. Most recently, Tom was the featured guest artist with the U. S. Army Blues Swamp Romp at the 2016 U. S. Army Band Tuba-Euphonium Workshop.
Tom is an active clinician and adjudicator nationwide. He is in demand as a recording artist, having made several CD’s with the Bayfield Brass Quintet, the Beltway Brass Quintet, and Off Bass Brass. His musical arrangements have been performed by numerous brass quintets, the United States Marine Band, the Chesapeake Orchestra, and the University of Maryland Marching Band.